We’ve been toying with Apple Watch. A lot.

This is part four of a month-long series on VR. Check out parts one, two, and three.

There are tons of virtual reality headsets coming out in the next year. How do they trick your mind into thinking you’re looking at a 3D space? What are the specs you need to make sure you don’t get sick?

3D is produced by showing two different images to each eye to simulate what your eyes would normally see. It tricks your brain into thinking you’re present in a digitally produced environment. It sounds pretty simple, but in order to actually allow a person see what they would naturally see in a different environment, the image that they are looking at needs to be updated between 40 and 60 times per second, keeping track of exactly what they’re looking at.

This means that in a matter of milliseconds, the headset needs to figure out the user’s position and orientation, pass this information to the computer, and the computer in turn needs to produce an image that matches what the world would look like from that specific point in space. 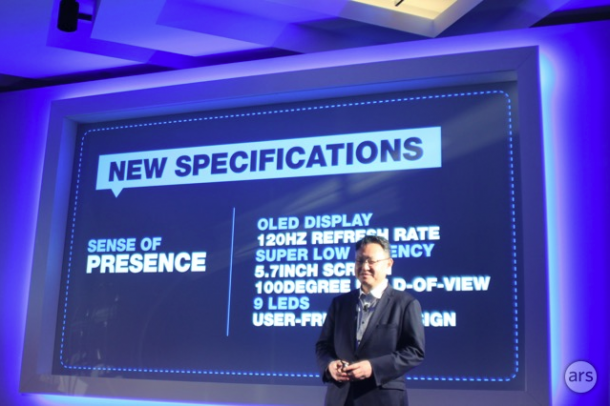 Advances made during the last decade in a number of fields have made it possible to produce a sense of “presence” that would have been impossible before. High resolution, high quality display technologies, and a push forward by the mobile phone market have made it possible to make portable “retina” quality screens that look great even when placed mere inches from your eyes.

Valve claims no one has gotten motion sickness while using the HTC Vive.

Sensor technologies such as accelerometers and gyroscopes, miniaturized and optimized for use in motion controllers and mobile devices, make it possible to track movement and orientation very accurately and very fast. Last, but not least, advances made in CGI for the entertainment industry make it possible to create very realistic real-time renderings of imaginary environments. Put these elements together and you have a portable headset capable of actually making a person feel like they’ve been transported to another world.

In the VR arms race, developers are trying to differentiate their hardware by claiming it has the lowest refresh rate, highest resolution, or lowest latency.

VR has been pushed forward very strongly by the gaming industry, but its application in gaming is still somewhat blurry. The reason for this is that even though you may be capable of creating the illusion of being in a fantasy world, you still need to solve the issue of allowing the player to act upon it.

This is where the controllers come in, but you can’t exactly let the player move around using their full body when they’re blinded to the physical world they’re moving around in. We’ve all seen the youtube videos of where that can lead. Solutions have been implemented using harnesses, rolling floors and dedicated rooms that track the user, but that’s very far from practical and ages away from becoming mainstream enough that making content for this platforms sounds like a good business proposition. There will always be classic controllers which gamers are used to, but can you really expect them to go through a long play session without being able to see the controller they’re using?

That leaves us with a technology that allows people to immerse themselves in an environment, but with very little capability to do much more than spectate. That sounds an awful lot like another huge branch of entertainment, where you look but don’t touch: cinema. Therefore, some of the first popular experiences in VR are bound to be experiences where you’re just an audience, immersed in a world in which things are happening, but unable to act on them.

Initially, VR’s strength will be experiences that allow users to navigate environments that would otherwise be unreachable, allowing them to effect changes that would be impossible in real life. You could for instance allow people to navigate their new home before it’s built, changing the furniture, the paint or the time of day. The big question right now is whether there’s going to be a wide adoption of the technology for household use, or if it’s going to be the type of thing that you run into at the mall as a curiosity.

The bottom line is VR is just a platform, a new display technology, and the most defining factor in it’s success and meaningfulness will be the content and experiences available in it.

Ever since Oculus Rift’s Kickstarter made $2.5 million in 2012, virtual reality (VR) has been “the future.”

Zemoga continues to innovate and grow under Kristen’s leadership in the Accounts department.

Kristen joined the New York Zemoga team in February 2014. Since then, she’s worked alongside Zemoga’s biggest clients and partners, and plays a key role in the agency’s ongoing success.

To meet the rest of the Z-Team, check out Zemoga.com’s “Who” page!

The NRF Big Show is a yearly retail innovation supershow, and Zemoga was on the scene to seek out the latest trends in retail tech.

The recurring theme this year was retailers starting to effectively use technology that has already been around for a couple years. Beacons and big data aren’t “new” anymore, but they have yet to be mastered.

The core of it is this: think of new technology as an addition to your ecosystem. Use it to bolster your other efforts instead of forcing it to carry all the weight on its own. No one needs an extra notification that says “buy this!”

Now that these technologies are in the hands of startups and the rest of the retail tech community, we’re benefitting from a wider range of thought.

Chad Rodriguez, Zemoga’s resident Strategy expert, attended all three days of NRF, and came to some interesting conclusions in our daily recaps:

Wenner Media has published the most recent project in a series of team-ups with Zemoga, entitled “The 40 Most Groundbreaking Albums of All Time.”

“Groundbreaking Albums” is the latest in a string of collaboration between Zemoga and Wenner Media. Previous projects include other feature articles for Rolling Stone and an article about international tennis player Milos Raonic for Men’s Journal.

Google announced their ARTOS12 Development Kit for Project Ara, which will allow individual to create their own modules for the modular phone.

Zemoga is honored to have our creative innovation featured yet again, this time by leading trendspotting publication PSFK.

Creatives build things. It doesn’t always have to be in ones and zeroes. Sometimes we like to put hammer to nail.

We started by looking at the problem. Unless you have experience, building something yourself is confusing. On HomeDepot.com , users will be able to choose what they want to build, such as a standing desk that can be made within a budget of $300 and has specific dimensions. Home Depot will aggregate all the pieces and hardware required to build it into a shopping list to build the desk within the user’s budget.

To make sure you don’t get lost in the home improvement store jungle, the Home Depot app will then use iBeacon technology in-store to lead users to where those items are located.

The nature of city living doesn’t always allow for the space to build DIY projects, but we can expand the possibilities by creating “Design Studios” within Home Depot stores. The Home Depot App will end by offering the shopper to build their item in one of Home Depot’s “Design Studios”. These are specialized small work spaces where tools, space, materials and everything else needed are provided for the customer.

Once completed, the Home Depot can deliver that item locally next day for the customer. Simple DIY can help thousands build better and build smarter in their own personal garage or working space.

New York Comic-Con is a real-world re-creation of a digital marketplace.