Day 3 of NRF is up and running, and today we really tried to find some cool things on the floor. Although we do find supply chain software sexy, you might not. So here are some of the highlights from the show. Oddly enough, the most interesting tech came from some of the bigger players.

These guys are always finding themselves in the guts of some really cool things. They’re the backbone to much of the technology we use today. Although I still believe my G4 Powerbook, which ran on IBM, was the best apple laptop of all time (back then everything really did “just work”), I love my latest 15” MacBook Pro.

The Dove experience was interesting. I will be honest: the display did a pretty poor job of taking the customer on the journey. You could tell that the purpose was to help people better understand the product. Again, biggest issue was figuring out how to interact with it. Did I swipe something, scan it, tap it? What do I do?! Once I figured it out, it didn’t do much besides show the product I scanned or swiped. It also had a lift sense on one side, so that when you picked up a product, it put it up on the screen. The issue was the products didn’t match what came up on the screen, but “A” for effort.

There was also a NE-YO experience that was kind of “meh.” Again, I didn’t really know what the stuff was doing. There was already music playing with a “virtual NE-YO” dancing. I’d push buttons on a laptop that would then add new sounds/mixes to the song. I’ve been playing music my whole life, and the funny thing was that most of the samples you could drop in didn’t really even seem to fit with the song. As I fumbled with trying to play with it, even virtual NE-YO got mad at me. He said, “come on bro, you can do better than that!”. I took that in stride considering NE-YO probably has no idea how to even write a song. I gave up. I think the purpose of the tech could very easily be applied to an “endless aisle” type feature where a shopper could simply scroll through many options of the same product. 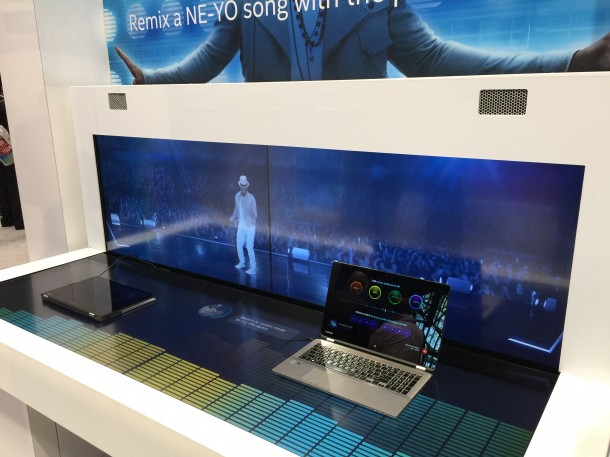 Imagine a shopper at Footlocker looking at shoes and the NIKE’s have about 30 colors but Footlocker really only wanted to stock about 5. Presto! You could use these screens to look at all the beautiful options (or just pull out your smartphone and go to NIKE.com). I digress.

What was cool about their booth was a plug-in box for a POS that grabbed real-time purchase decisions. So, if you’re McDonalds you could plug this thing into your terminal and it would just start capturing real time data that you could put on a dashboard. What’s great is that this box is POS System agnostic. It can hook up to anything, which is super helpful to the retailer. The simplest things always have the most impact when it comes to technology. 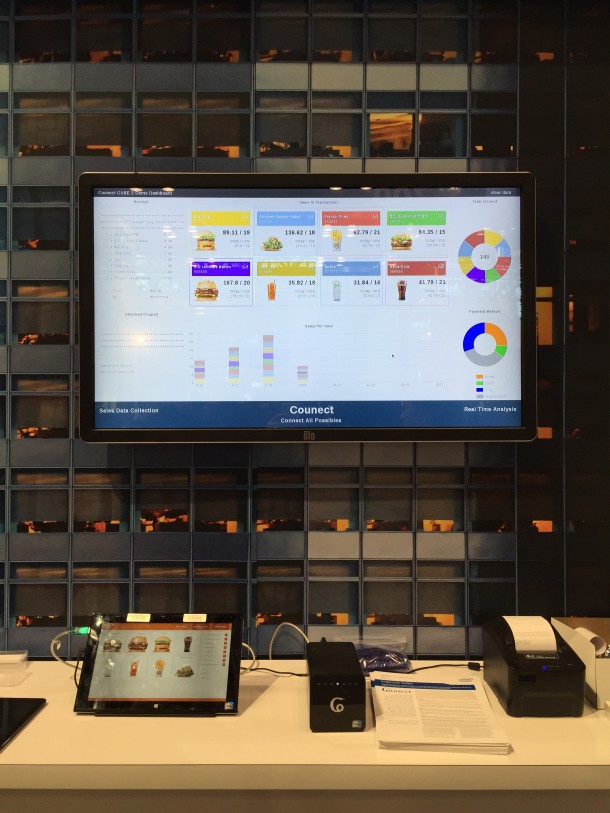 These guys are the backbone for so many industries, but their Hybris system is pretty cool. They had a great dressing room technology incorporating RFID. RFID at one point in my life was the bain of my existence. It use to be very expensive and clunky. I used to lead innovation for a very high end luxury retailer. We had incorporated RFID almost 7 years ago into the dressing room only to watch it fail miserably. Time seems to cure all things, as now the cost of the technology has dropped significantly and it easily sticks right on a price tag.

This speaks to the notion that being first and buying the kitchen sink doesn’t always work. The technology was interesting back then, but it needed time to evolve and allow the things to support it to catch up. Bluetooth is very much the same. It’s not until BLE came along and the software caught up that it’s become a viable option via beacons. Being good at retail strategy is seeing the curve ahead. It’s understanding that this is great technology, but not right now. 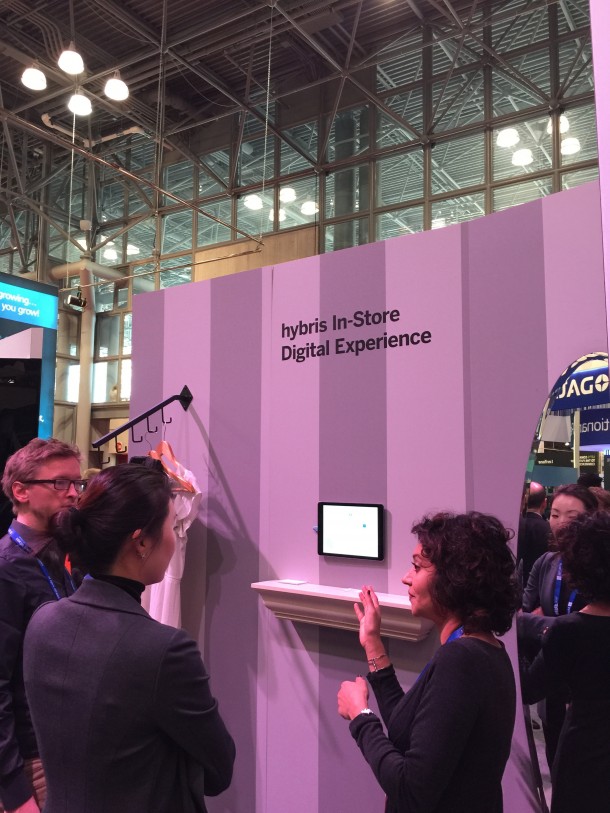 They also had a sensor panel where a user could go up to an iPad kiosk input a few of their wine preferences and then the appropriate bottle on the wall would light up. Once someone grabbed the bottle it would measure it being picked up and put back if the customer decided to pass. The retailer would get real time data on this, which is always helpful. Obviously the technology could be applied to a variety of products (Dove and Intel could use Hybris help).

To be honest there was nothing super interesting there. We just went because they were showing off some XboxOne games, and who doesn’t love video games? 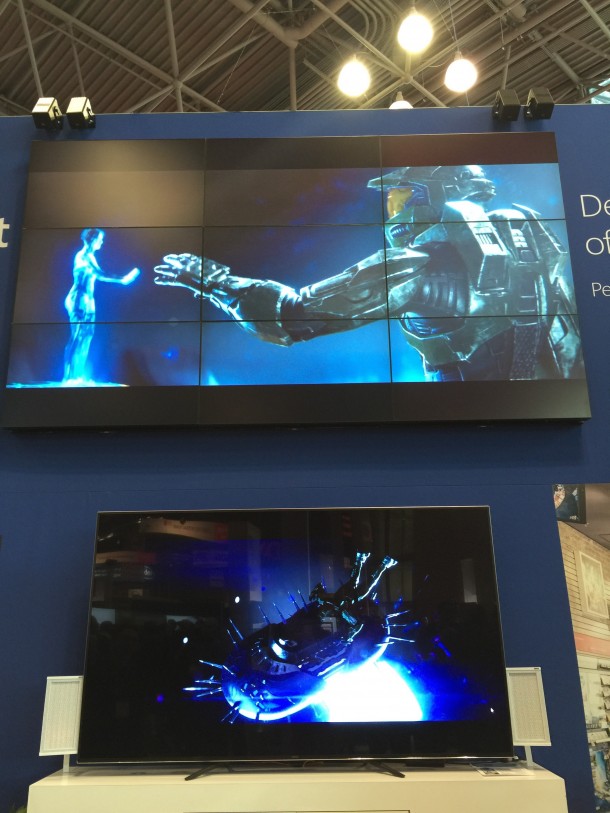 Thanks for following along. We’ll have an overall recap tomorrow about leveraging these strategies and how it relates to your roadmaps and startups.

IBM is at NRF, and in full force.

Zemoga was onsite for the first official day of NRF.

Go green! Zemoga is looking for a part-time Financial Controller.

Our work for Anchorman 2 was kind of a big deal.

END_OF_DOCUMENT_TOKEN_TO_BE_REPLACED

Weren’t at the Integrated Marketing Week conference on Wednesday?Here are some quick hits on the most exciting sessions, or, take a look at our day one recap!

END_OF_DOCUMENT_TOKEN_TO_BE_REPLACED

You’re talented. You’re passionate. You have a strange affinity for the color green. Zemoga is looking for a Senior Strategist. Do you fit the bill?

As a Senior Digital Strategist for Zemoga, you will work closely with our clients to deliver inspired, innovative and creative digital product, marketing, and communication strategies. From overseeing the development and launch of new websites, products, and apps to campaigns engaging key audiences through digital media and social, you will make sure that our clients are proud of their digital brand presence and generating the results they are looking for. You will help make Experience Architecture real.

The Senior Strategist plays a key role in driving client strategy for both new and current clients, focused on illuminating the ideas and concepts that drive our agency’s engagement. You are a passionate, innovative big picture thinker who can connect all the digital dots from web to mobile to social to new emerging channels and more. You must want to be working in a fun, fast paced, entrepreneurial environment and thrive being around creativity and excitement. You will bring a creative and strategic approach and be able to help come up with exciting forward thinking ideas that strongly align with clients’ business goals.

Please send your resumé to staffing.us@zemoga.com.

Weren’t at #IMW14 on Tuesday? Here are some quick hits on the most exciting sessions:

END_OF_DOCUMENT_TOKEN_TO_BE_REPLACED

Look for the infographic to be released at Cannes Lions, and to be showcased by SoDA at other events as well.

The SoDA agencies are at the forefront of innovative thinking. Some of us are tinkering with smart watches, others with iBeacons, and more with ideas the public hasn’t even seen yet. Get introduced to SoDA and find roundtables about all things innovation.