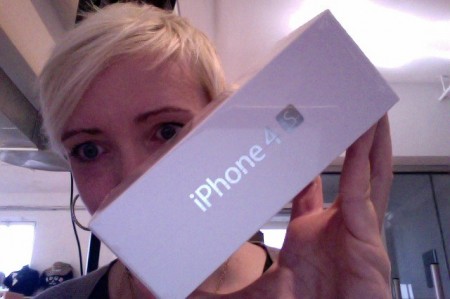 About a year ago, I shared a post about my Android phone, the platform itself and how much I enjoyed using it, even though, in my deepest nerd core, I have always been an Apple girl.

Amazing how things can change over the course of one short year.

END_OF_DOCUMENT_TOKEN_TO_BE_REPLACED

In light of yesterday’s post from Dan Licht, we thought it would be fun to take a look at some misfires from ghosts of Apple past.

END_OF_DOCUMENT_TOKEN_TO_BE_REPLACED

Let’s face it, using real names or not, we’re all hiding something when it comes to our presence on social media platforms.

END_OF_DOCUMENT_TOKEN_TO_BE_REPLACED

This post was originally published on 10/25 at Pixels & Pills and is republished with permission. And the tech world is rallying to help.

END_OF_DOCUMENT_TOKEN_TO_BE_REPLACED

Here’s a question for you: What’s the point of using social media tools for business-to-business marketing? Is there any point to it? Or is a total waste of time?

This is something I get asked from time to time. And, after seeing the following pop into my Twitter feed recently, I felt it was a topic that would be great to address here.

END_OF_DOCUMENT_TOKEN_TO_BE_REPLACED

Can I get a quick show of hands? Who thinks social media is all fun and games? Rainbows and unicorns, maybe?

END_OF_DOCUMENT_TOKEN_TO_BE_REPLACED

Everyone is talking about social media metrics. What to measure, how to measure, when to measure… And what tools are the best for collecting this data.

While I’ll approach those questions in subsequent posts, I thought I’d take a moment to share a couple of recent changes to two measurement tools most of you are already using – Facebook Insights and Google Analytics – that you may have missed.

END_OF_DOCUMENT_TOKEN_TO_BE_REPLACED

Ronald Valero, who is a fantastic barista (training for the World Barista Championship!) at Juan Valdez, made me this amazing Teddy Bear in the foam of my Cappuccino.

This post was written prior to our learning of Steve Jobs passing. For thoughts on what Steve Jobs meant to so many people, and the legacy he leaves behind, please see this post, from our CTO Dennis Portello.

Like so many other nerds, I sat at my desk Tuesday, waiting for the clock to hit 1PM EDT. Lacking a Livestream from Apple, I had browser windows open to both Engadget and Mashable live blogs. And though I’m not really big on rumors, like most of you, I was eager to learn all about the magical (and, as we now know, mythical) iPhone5.

But I’d read what that The Next Web had to say that morning.

And maybe that’s why I wasn’t bummed out.

Or maybe it’s because I’ve long been an Android girl, living in an iPhone world – loving my Swype keyboard and the ability to run multiple apps, not so pleased with the fact that Angry Birds runs in slow motion and lack of Instagram (and so many other apps that are developed only for iPhone and never, or late, for Android). Whatever the case, I’m not disappointed with the iPhone 4S. In fact, I think it looks pretty amazing.

I know a lot of you were really upset that there was no iPhone5 announcement – at least that’s what, anecdotally, my Twitter stream is telling me. But is that so bad? Aren’t the changes, updates and upgrades enough to at least put a little smile on your face?

Below are six things about the iPhone 4s that are, in my opinion, pretty amazing:

iOS 5: Advanced mobile operating system, with over 200 new features – including wireless updates to the iOS.

A5 processor: This is the same processor that is found in the iPad2 – more power, faster graphics and longer battery life that the iPhone4.

iCloud: How cool is this? Haven’t you been waiting for it? It’s integrated into all your apps, it syncs your docs and music on all your (Apple) devices. It backs up every day. You’ll never lose anything again.

8 Megapixel Camera: Seriously. I have an 8 megapixel point and shoot that cost more than the high end of this phone. And it can’t play games or upload pictures onto Facebook.

Twitter Integration: If you are like me and you use Twitter basically non-stop (follow me, you’ll see), this is going to be priceless. I’m sure that I’ll still need Tweetdeck (it’s my lifeline), but to take a picture and have it go to Twitter directly, this is awesome.

Siri: I mean, who doesn’t want a Joan Holloway of their very own?

There are a lot of naysayers right now, saying that the iPhone 4S is a big disappointment.

And maybe Tim Cook’s announcement didn’t live up to something that Steve Jobs would have done. He’s not the same man and his style is going to be different, no matter what the cult of Mac is looking for.

As someone who has been researching phones lately – on a personal level – the iPhone 4s looks like it is going to be the best phone on the market. I can’t wait to get my hands on one.

What do you think?

by Briana Campbell (@MsMatchGirl)
Social media tools are everywhere. In every country, to some extent, around the globe. They have become a part of our every day. A part of our culture. In fact, in a February 2011 study, Colombia was ranked in the top 8 amongst countries on Facebook. And overall usage of social media in Latin America is on the rise. So why not use these tools, that we all use every day, to enhance and improve education?
END_OF_DOCUMENT_TOKEN_TO_BE_REPLACED